Scarves and ties can be bought at meetings or by contacting one of the officers.

The first Society scarf was designed by the then Junior Treasurer, Mlle I. Dubois in 1994. The initial stock was sold and a second batch ordered about ten years later.

The colours are those of arms of the University except that sable has been replaced by purpure in recognition of the Society’s then Patron.

A second scarf was devised in 2009 by Mr D. Broomfield. On one side it is black with two yellow–red–yellow stripes (of widths 3/4”, 1" and 3/4“ respectively); at one end is an embroidery showing the Society’s arms. The other side is plain black.

Scarves can be bought at meetings or by contacting one of the officers. 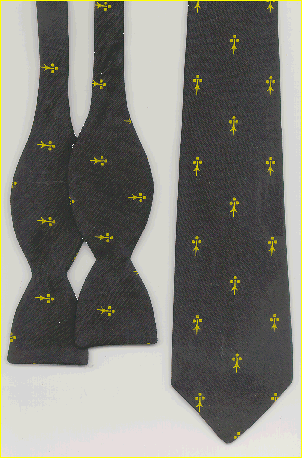 Besides being appropriate for a heraldry society, it is particularly suitable for a Cambridge University society since its pattern brings to mind the ermine (i.e. black ermine spots on white) cross of the university’s coat of arms and also, as a fur, the fur used for the hoods of bachelors.

The tie was designed in 1958 by the then Junior Treasurer, Dr J. Bell of Magdalene College.